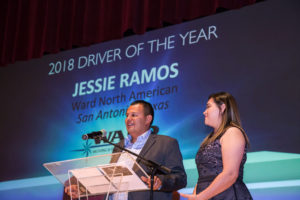 “Everyone at every level in the northAmerican network is committed to providing the highest quality and best possible experience for our customers,” said Andy Kroll, VP and General Manager of North American Van Lines. “Recipients of the prestigious Driver of the Year award are drivers that truly embrace, and live, our commitment to excellence every day. We are honored and privileged to have a driver like Jesse Ramos as part of northAmerican.”

“Ward North American, its employees and drivers, are committed to delivering quality service to every Ward customer, on every move,” says Kevin Ankenbauer, President and Owner of Ward North American. “Jesse Ramos is a perfect example of how a focus on quality and dedication to providing the best possible customer experience makes you a winner every day, not only when recognized. We are proud to have Jesse as a valued member of the Ward family.”

Jesse Ramos has been a moving industry driver for 18 years, the last seven of which have been with Ward North American in San Antonio, TX. Jesse comes from a family of moving-industry drivers, initially learning to drive a tractor from his cousin. Since 2013, Jesse has won his agency’s Driver of the Year award three times. He credits his award-winning background to the focus on quality service, communication and delivering an overall excellent moving experience instilled by Ward North American and northAmerican Van Lines, as well as the support of his wife of 12 years, Manuela, who travels with him as his business partner. Jesse takes extreme pride and care in loading his trailer and enjoys collaborating with fellow drivers and helpers on new ways of delivering an even better moving experience. The things Jesse cherishes about moving household goods are the smiles and the many heart-warming letters of gratitude he receives from his customers. When not on the road, Jesse and his lovely wife enjoy spending time with family and friends.