As the capital of Texas, Austin has the big personality and vibrant culture that you would expect from the heart of the Lone Star State, and Texans know it. This third-largest Texan city boasts a population of 2.25 million.

It isn’t just Texans who recognize Austin’s appeal, however. Between 2000 and 2010, Austin’s population doubled, an influx driven by an average of 100 new residents a day from cities as far ranging as Sacramento, California; Las Vegas, Nevada; and Atlanta, Georgia.

Why are people moving to Austin, TX? Read on to learn more about some of the many reasons to love, and live in, this city.

The ability to find good-paying jobs is one of the biggest reasons people flock to Austin. The city is a thriving hub of tech startups and big-name tech companies, so much so that it has earned the nickname “Silicon Hills.” Consider the following tech facts about the city:

Technology may be central to Austin’s thriving job market, but it isn’t the only industry there. Find diverse jobs across an array of industries, including:

Austin’s thriving economy and the strong presence of established businesses, numerous small businesses, and feisty startups allow it to offer residents an average weekly pay that is 10 percent greater than the national average.

So healthy is the city’s economy that it earns accolades as one of the top cities in the nation for young entrepreneurs, women entrepreneurs, and startups.

Its job market is growing so fast that it is listed by Bloomberg as the top city for economic growth in Texas, and the 5th fastest growing city in the entire nation. 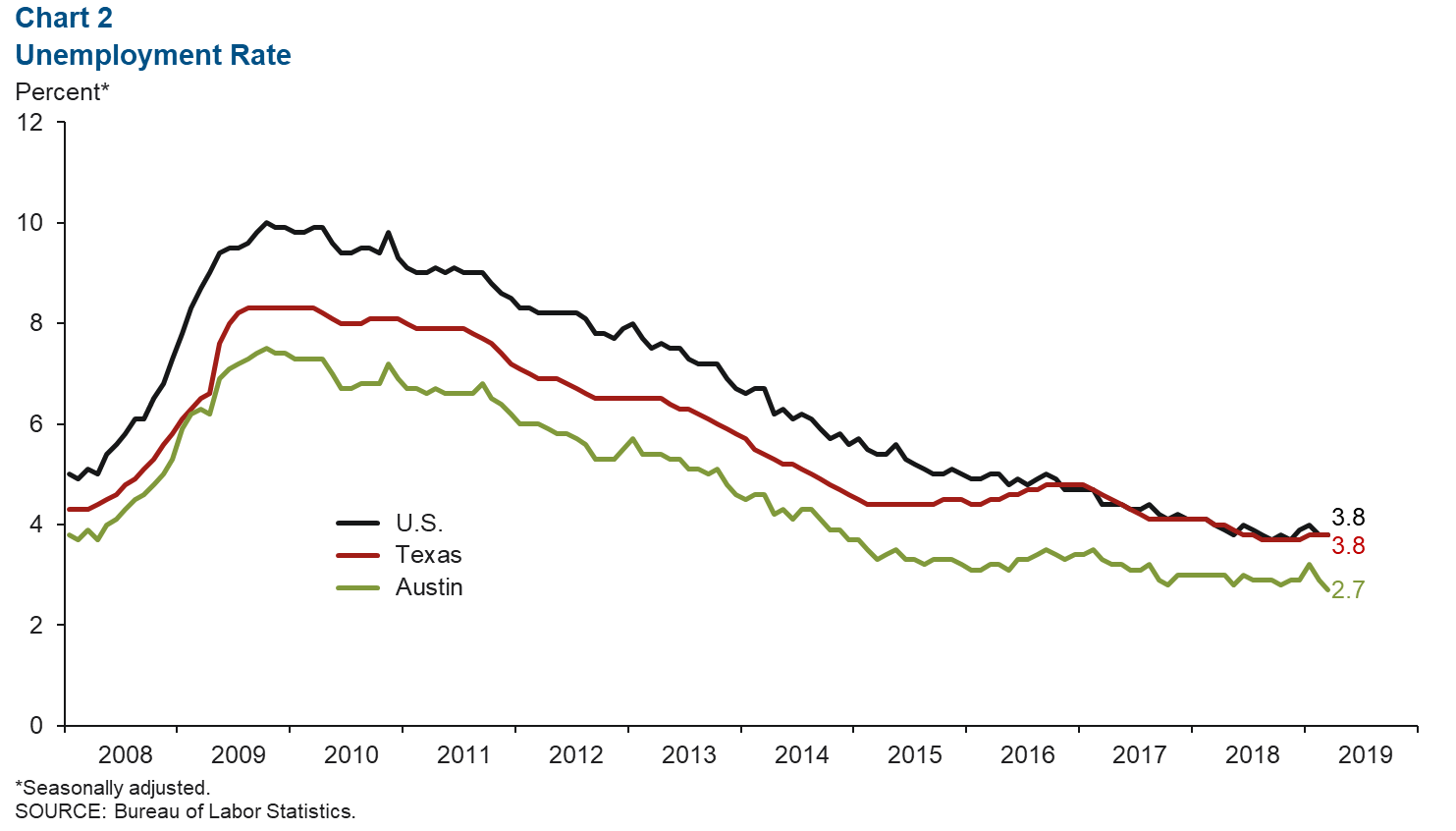 Currently, its unemployment rate is lower than the national average, at a very small 2.7 percent. With numerous good jobs available, a relocation to Texas is a smart decision for numerous talented individuals and families.

High salaries often accompany a high cost of living, but in Austin, you can earn a good salary without spending it all on food and housing.

One of the reasons so many people move to Austin from other big cities such as San Diego, CA, is because they can find a lower cost of living to accompany the good jobs they desire.

Austin does not provide the lowest possible costs in the country. In fact, with a median home price of just over $400,000, prices can feel steep if you come from a more rural part of the country.

However, what makes Austin’s cost of living appealing is the comparatively low costs compared to other major cities, combined with the high median income. Consider the following numbers:

With the ability to keep more of their income, people flock to Austin eager to enjoy the good things in life that are made possible by a reasonable cost of living.

Finding safe, desirable places to live is another essential requirement of any relocation. Austin draws new residents in part because anyone can find a neighborhood that suits their needs, preferences, and budget within the city.

From the bustling downtown neighborhood in the center of Austin’s vibrant community, to the beautiful countryside of West Austin, you can find your perfect home in the city.

The city’s diverse population and numerous housing options are part of what earn it accolades as the best city to raise a family, one of the best cities for millennials to live, and one of the top cities to retire.

Here is a look at some of the most popular and well-known of Austin’s neighborhoods:

Austin’s downtown area is the center of the city’s vibrant entertainment and dining culture, and it is also the place where you can find upscale condos and apartments to make your home. You will pay more for these premium spaces, but you will also be within walking distance of everything you could possibly want to enjoy in the city.

Diversity reigns supreme in East Austin, which has recently transformed itself into a vibrant area of both hipster and historic culture. As one of the fastest-growing areas of the city, it appeals to anyone who wants to enjoy culture, history, and art within a walkable area that is also close to downtown.

West Austin is an affluent part of the city, located in the countryside, where greenery is in abundance. This beautiful part of the city boasts golf clubs, great schools, and large homes where families can live comfortably while still enjoying access to the city’s Loop 360.

For three seasons out of the year, the weather in Austin is beautiful. Far from the freezing cold and snow of winter, Austin winters typically have high temperatures in the 60s and 70s, with spring and fall providing balmy highs in the 80s.

Austin’s weather is so consistently beautiful, that 7 months of the year have an average high in the perfect 70s. The only season that might dismay some people is summer, when the highs can top 100 degrees and the lows remain around 70. Even then, you can enjoy central air, ice cream, and swimming to beat the heat until the more pleasant months of the year return.

Thanks to the consistently beautiful weather, Austin possesses an outdoor culture that makes Austinites some of the healthiest people in the country. The city boasts a healthy 220 parks, 250 gyms, 30 swimming holes, many lakes, and numerous walking and hiking trails. Enjoy the following outdoor activities in this outdoor-loving city:

In addition to numerous outdoor activities, Austin residents can pursue other fitness activities, including yoga, pilates, workouts, and more. Staying outside and staying fit is easy in Austin, and that appeals to many of the residents who choose to relocate to the city from all across the nation.

Austin, TX, is known as the “Live Music Capital of the World,” and it lives up to that name with a never ending stream of live music acts that create a vibrant, fun atmosphere you can access almost any time of the day or night.

Choose from any style of live music you desire. Hip hop, country, blues, jazz, and rock are all available. While there are many establishments that provide this live music, you can be sure to find great music at some of the following locales:

Thrillist lists Austin as the best city for music, and its nightlife is well-known. Great jobs and great entertainment are the perfect combination for drawing new residents by the thousands.

Great music isn’t just the only way to pass the time in Austin. The city also boasts some exceptional food and a foodie atmosphere that makes delicious dishes a regular part of life in the city.

You can find a wide cuisine here in the city. Tex-Mex food is a given, but you can also enjoy superior food from some of the following businesses:

Jobs and entertainment may draw residents to Austin, but it is good old-fashioned Texan friendliness that often keeps them in this up-and-coming city. Enjoy conversations with cashiers and customers while running your errands. Find willing assistance whenever you need it.

Because of this friendliness and kindness, you can easily fit into your perfect part of the Austin community, finding friendship, support, and belonging that can make this ever-growing city feel more like a small and comfortable town.

Choosing Austin for your home is a good choice for many reasons. Whether you choose to move here or come because of a job or other reason, you are likely to fall in love with its beautiful weather, beautiful people, and beautiful culture.

If you choose to move to Austin, consider this moving trend. Moves begin to rise in January and continue to increase steadily until about the first week of July. Pleasant weather contributes to making this a desirable window for your relocation. However, you may find better rates and more availability if you move outside this popular window of time.

The next time you need to relocate to Austin, or anywhere else, at any time of the year, consider using the professional strength movers of Ward North American. We don’t just move belongings; we move lives. We would be happy to use our experience moving clients across the country to help you start an exciting new life in Austin (or anywhere else you need to go).